If you’re planning a trip to Costa Rica and planning your budget for your trip, you’re probably asking is it customary to tip in Costa Rica? Well, the answer is yes. Whilst it’s not mandatory, tipping in Costa Rica is considered a pleasant gesture.

Whilst it wasn’t shoved in my face during my time in Costa Rica, it was definitely an unspoken rule. And quite frankly, after experiencing the cheerful, kind and attentive welcoming from the Pura Vilda folks, you’ll probably want to go out of your way to tip them.

Seeing their faces light up once they receive their tip definitely makes it worth it. Even for someone like me that comes from London, where the tipping etiquette is a foreign concept.

Is The Tipping Culture In Costa Rica The Same As in The USA?

The tipping culture in Costa Rica is very similar to that in the United States. In both countries, tipping is seen as a way to show appreciation for good service and is generally expected in many different types of establishments, from restaurants to hotels.

However, the Costa Ricans aren’t as pushy for tips as in the US, and tipping is usually considered to be more of an optional gesture of goodwill than an absolute necessity. So you won’t have to worry about waiters and waitresses chasing you down the road should they think you did not tip enough.

Coming From A Country Where Tipping Isn’t Customary, Do I Still Need To Tip?

If you are coming from a country where tipping is not customary, you may be wondering whether tipping in Costa Rica is still necessary. While tipping is not mandatory, it is always appreciated by service staff.

If you have received good service, tipping 10-15% of the bill is standard practice in Costa Rica. This is especially true if you are tipping a restaurant server or hotel staff, though tipping taxi drivers and tour guides are also customary.

Overall, tipping in Costa Rica is a good way to show your gratitude for the excellent service that you have received during your trip. Whether tipping is a regular part of your culture or not, it is considered polite and respectful to leave a small token of appreciation whenever you receive good service.

Even if you’re like us Londoners and you don’t believe in paying extra for a service that you’ve already paid for.

Should I Tip In US Dollars Or Costa Rican Colones?

If you’re tipping in Costa Rica, you should ideally tip in Costa Rican colones. The reason for this is that while US dollars are accepted in many establishments, tipping in US dollars may not always be appreciated by service staff.

However, it is perfectly acceptable to leave a tip in US dollars. Especially if you’re coming from the US, as you won’t have the need to exchange your money first.

Though if you’re coming from the UK and Europe, you may find that you get more for your money by exchanging your Great British Pounds or Euros for Costa Rican Colones rather than US Dollars.

In general, it is always best to tip in the local currency whenever possible.

The Best Travel Wallets To Take To Costa Rica

If you’re planning on tipping in Costa Rica, you’ll need to make sure that you have a good travel wallet to keep your cash safe every time you flash your cash. There are a few things to look for when choosing a travel wallet, such as size, security and convenience.

And with that in mind, I present to you, some of the best travel wallets from Amazon to take to Costa Rica.

Which Tour Guides Should You Tip In Costa Rica

If you’re planning on tipping in Costa Rica, it’s important to understand the tipping etiquette for different types of tour guides. In general, tipping is expected in most establishments across Costa Rica. And this includes your tour guide for a specific activity, an entire day out as well as multi day tour guides.

But when you’re interacting with multiple tour guides, then things can get tricky. But as a rule of thumb, always tip the tour guide that has been assigned to you. That means, even if you happen to interact with additional tour guides, you don’t have to tip them.

However, if you’ve found the additional tour guides to provide a great service, there’s nothing to stop you from tipping them as well. In some places, you may even find a tipping jar where you can pop your tip in. This will then be shared between all the staff.

How Much To Tip A Tour Guide

Multi-Day Tour Guides: In general, tipping multi-day tour guides depends on several factors, such as the length of the tour, the number of people in your group, and the level of service provided. For example, a tip of $10 per person per day for a multi-day tour guide is considered to be standard practice.

Tipping tour drivers is not always required in Costa Rica. But if you feel that they’ve provided a great service, then tipping them 10-15% of the cost of the tour is considered to be standard practice. Especially if you have a single tour driver for a multi day tour.

Tipping shuttle drivers in Costa Rica is also not always required. But if you feel that they’ve provided a great service, then tipping them $4-$5 per person is considered to be standard practice.

Like the above, tipping private drivers in Costa Rica is not mandatory. But if you feel that they’ve provided a great service, then tipping them $10-$20 per person is considered to be standard practice.

Finally, tipping taxi drivers in Costa Rica is also not required. But if you feel that they’ve provided a great service, then tipping them 10-15% of the fare is considered to be standard practice.

In Costa Rica tipping is an expected part of most restaurant transactions. As staff are often paid low wages they rely on tips to supplement their income.

In general, tipping in restaurants in Costa Rica varies from 10-15% of your total bill. But this depends on the quality of service you’ve received. If you’re unsure about how much to tip, a good rule of thumb is to simply round up your bill to the nearest thousand colones.

However, if a service charge is already included in your bill (indicated by the initials “SVC”), then tipping is not necessary. You’ll usually see this as a 10% additional charge, and most places will already include this in your bill.

Tipping in an all inclusive Costa Rican hotel or resort can be tricky. As tipping customs can vary depending on where you’re staying at. Some hotels and resorts in Costa Rica have tipping policies in place. While others rely on travellers to make tipping decisions for themselves.

When it comes to tipping a doorman in an all inclusive Costa Rican hotel or resort, there is no set amount that you should give. It is entirely up to you how much you wish to tip, and when. However, it is generally considered good etiquette to tip a doorman if they have been helpful in any way during your stay.

For example, if they held the door open for you or helped with your luggage, it is a good idea to tip them a small amount, such as $2-$5 per instance.

If you have your luggage brought to your room by a bellhop or porter, it is customary to tip them $1-$2 per bag. However, if you are staying in an all-inclusive Costa Rican hotel or resort and have a large amount of luggage, you may want to consider tipping them a bit more.

First and foremost, tipping is not required but always appreciated by the housekeeping staff. If you do choose to tip, it is generally recommended that you leave a small amount each day rather than a lump sum at the end of your stay. This allows the staff to more evenly distribute tips amongst themselves.

As for how much to tip, a good rule of thumb is $1-$5 per day. A $1 tip will generally be appreciated by those who are cleaning your room, while tipping more for exceptional service or if you have a larger room is also perfectly acceptable.

Keep in mind that tipping housekeeping in Costa Rica is not the only way to show your appreciation. Simply taking the time to say hello can go a long way.

When it comes to tipping for room service, again, it is not required but always appreciated. A good rule of thumb is $1-$2 per dish, depending on the cost of the dish itself. If you order multiple dishes or if the room service staff goes above and beyond, tipping more is perfectly acceptable.

When travelling to an all-inclusive Costa Rican hotel or resort, tipping the concierge staff is a great way to show your appreciation for their exceptional service.

Typically, tipping the concierge staff is expected if you have received any special treatment or assistance during your stay. This can include anything from securing reservations at difficult-to-get restaurants to getting tickets to a sold-out show, or simply booking your activities for you.

If you are unsure of how much to tip, a general rule of thumb is to tip $1-$2 per day of your stay. Or 20-30% of the total price of any special services you received.

If you receive a massage, tipping the therapist is always appreciated. The standard tipping rate for spa services in Costa Rica is 10-15%, but you may want to tip a bit more if you received an exceptional massage or treatment.

When Is The Best Time To Go To Costa Rica

And there we have it, all that you need to know about tipping in Costa Rica. Whilst tipping isn’t compulsory and as mandated as in the US, it is highly appreciated.

If you found this article useful, then be sure to share it with your family, friends, and social media followers, so that they too can benefit from it. 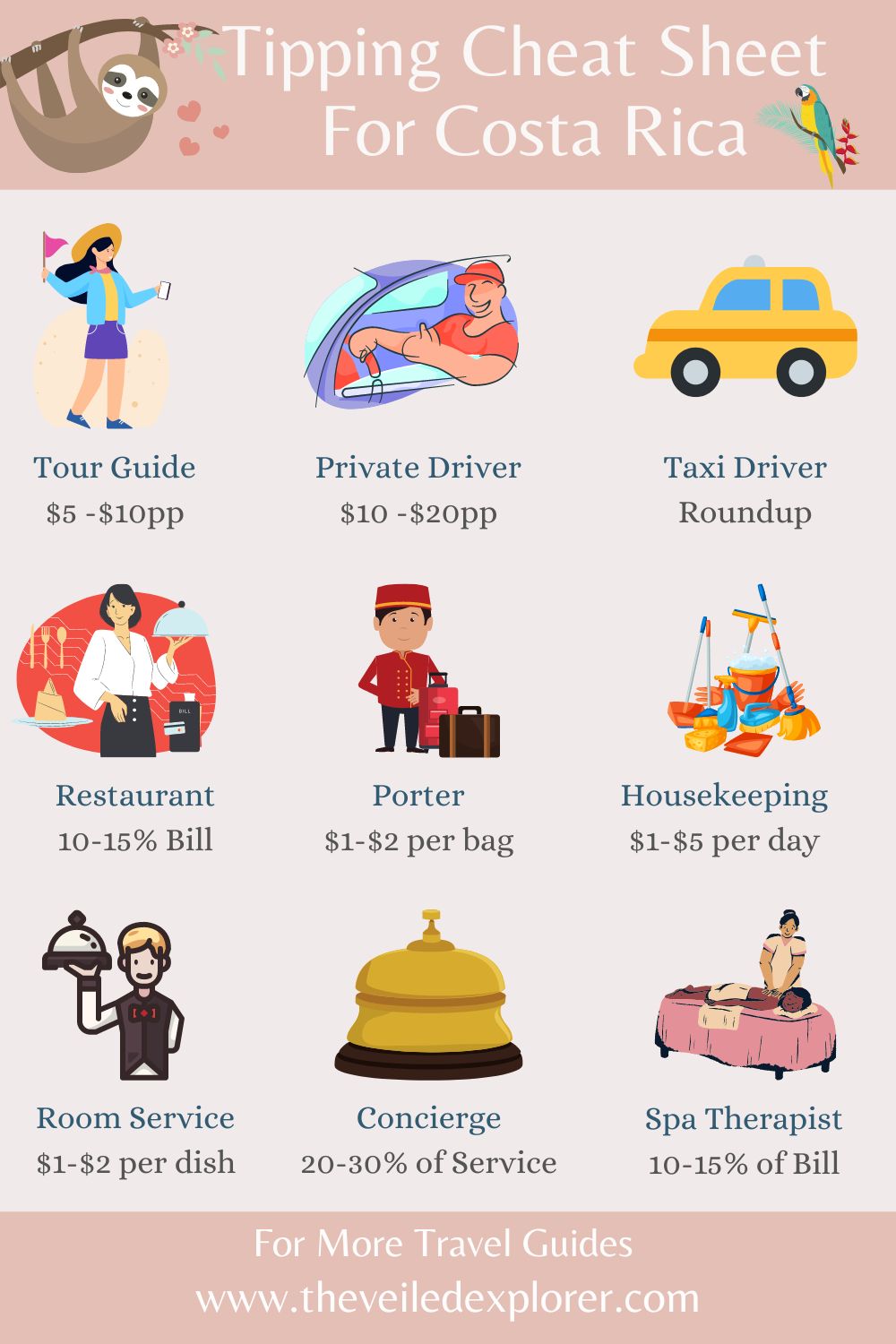